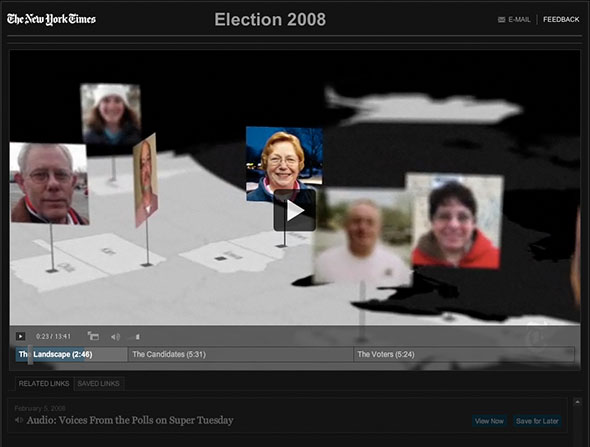 Choosing a President on nytimes.com

Remember when it looked like the election hinged on the candidate’s stance on Iraq? This presidential campaign has been two years in the making and the political landscape has changed a lot over those two years. Our video/photo/interactive historical look back has been a little over a week in the making but that week included some 24hr workdays. The day before the election we published Choosing a President.

We had a hard time pitching this at the Times. It was hard to explain what we were trying to do to the top editors. We didn’t want to do a video, or an interactive or a photo gallery. We didn’t want to tell an audio story or a print story or a story through infographics and illustration. We wanted to do it all. In one story. To make it all work as one. To make it long by web standards. Most of all, we wanted it to be good. I mean, why would you do less telling the story of the most significant presidential campaign in history?

I Think it Worked

We thought that setting up the political landscape in 2006 would be a great way to start this story. The problem is, it’s complex. To paint the scene in 2006 you have to introduce a lot of characters, relationships between contenders and political parties, motivations etc. Just cutting from photo to photo or video clip to video clip over top of narration didn’t seem like the best way to do this in a timely fashion. We opted to produce the opening sequences in After Effects, so that we could introduce the field of candidates and visually show relationships and motivations backed by narration.

Getting back into After Effects was fun. It can be a daunting program if you don’t use it everyday, and getting your head into it can sometimes take awhile but in the end, it can do things you can’t do with a camera. Like pivot on a dime hovering over the U.S. and swinging from state to state to hear the voices of voters. Hopefully we will use this story telling device more in the future. We’re a long way from the production quality of the TV and movie industries that use these post production programs everyday but I like to think we look a little classier. 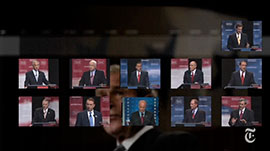 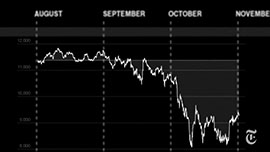 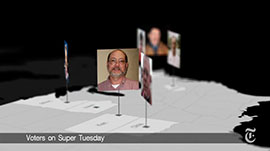 Storyboards for the first chapter which was later produced in After Effects.

Some people wanted to know how the work was divided among the producers and what sort of timetable we were working under. So here it is.

For the most part Nancy did a majority of the editing work in Final Cut but at times Amy, Andrew, and I would also work on some of the edits. We worked very collaboratively and we divided up the workflow effectively. It helped that we were all on the same page, as far as storytelling goes, so we all work together towards the same goal.

We had a little over a week to get this project done, but most of the actual production didn’t start until the Wednesday before the election. We were done by Sunday and very sleep deprived.

Screen-shot of the final After Effects project

Zach Wise is an award-winning former Senior Multimedia Producer for The New York Times and Associate Professor at Northwestern University.

Tony-nominated actors perform scenes from their shows out of costume but in character.

Experience the frenzy and interconnectivity of backstage at the first show at Lincoln Center during New York Fashion Week.

An animated explanation of how banks use securities lending to make a profit, while their customers cover the losses.